Warning: Use of undefined constant PLUGIN_SEOBOOSTERPRO_LAST_CRON - assumed 'PLUGIN_SEOBOOSTERPRO_LAST_CRON' (this will throw an Error in a future version of PHP) in /www/wwwroot/yokaiwatch.membahas.com/wp-content/plugins/seo-booster-pro/seo-booster.php on line 1812
 Snartle (Namahage) Youkai | Yo-Kai Watch | Yokai 
Warning: Illegal string offset 'background-color' in /www/wwwroot/yokaiwatch.membahas.com/wp-content/themes/pinteres/includes/functions/_css_ktz.php on line 75

Warning: Cannot assign an empty string to a string offset in /www/wwwroot/yokaiwatch.membahas.com/wp-content/themes/pinteres/includes/functions/_css_ktz.php on line 79

Warning: Cannot assign an empty string to a string offset in /www/wwwroot/yokaiwatch.membahas.com/wp-content/themes/pinteres/includes/functions/_css_ktz.php on line 83

Warning: Cannot assign an empty string to a string offset in /www/wwwroot/yokaiwatch.membahas.com/wp-content/themes/pinteres/includes/functions/_css_ktz.php on line 87 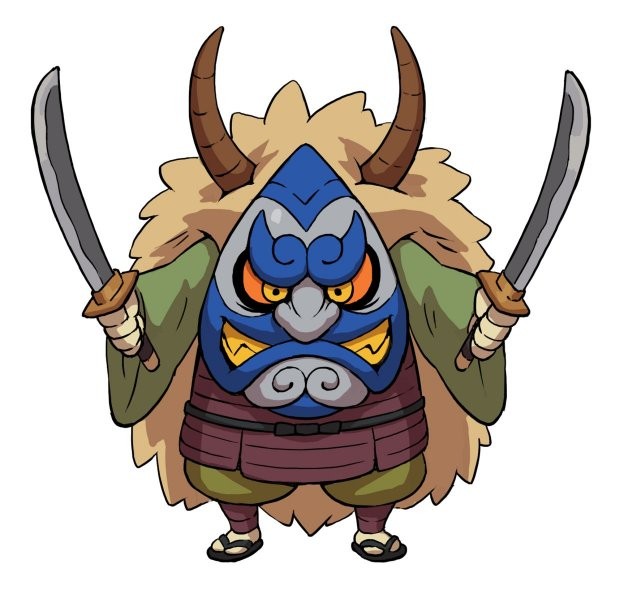 This Yo-kai visits homes asking "Any brats here?" He uses his knives to scare children. He is revered as a popular figure, so much as so that people dress up as him to scare children into being good.

Snartle is a strict Yo-kai who comes after misbehaving kids. In Yo-kai Watch, If the player crosses the street 5 times without changing the signal beforehand, Snartle will attack them to teach them a lesson. In the anime, Snartle wants to teach city kids how to behave, but he cannot do so due to the city laws, making him depressed. As such, he desires to find a new form of being useful.

In the games, Snartle is very powerful even by S-rank Yo-kai standards, as he can single-handily wipe out an ill-prepared team of six Yo-kai. It should be noted that the Traffic Light-event Snartle's power is influenced by the Watch Rank of the player's Yo-kai Watch.

In the anime, he can be seen by people without a Yo-kai Watch due to him being an ancient Yo-kai, which, while proven useful in the countryside, is a flipside in the city as he can being arrested due to swinging his swords in public.

TRIVIA
Snartle is based on the Namahage (also his Japanese name), a bogeyman from the Iga peninsula. During New Year's, unmarried men of Iga dress up with oni masks and straw coats, and go around scaring girls and children brandishing a large kitchen knife and a wooden bucket, while chanting "Any crybabies in here? Are there any naughty brats?" The creature's name derives from namomi, the heat blisters one gets from sitting by a fire for too long, and hageru, "peeling off". The kitchen knife signifies the threat they'll peel the namomi off of any lazy bum who spends all winter in front of the fireplace doing nothing.
Yo-Kai Watch Yokai List